hello all,
we hope you are still doing fine.

With Rebel Up we have started hosting special livestream sessions 2x per week, to share music into your livingroom for every moment of the day.

Every wednesday and saturday evening from 20h to midnight, we host up to 4 livestreams on our Twitch channel, played live by DJ’s and artists from allover the world.

For info and lineups, check our FB event

Check out our previous 2 session evenings, archived at our channel.

Last thursday we also had our monthly Rebel Up & Friends quarantine session via Kiosk Radio. With special guest Rokeya, a female italo-bangladeshi producer from Italy on the Adriatic coast side for a DJ set of global beats. Rebel Up had a lush session from the sahel to the islands.

ahoy,
Rebel Up will be at Fusion festival 2019 in Germany!

PRAED
Founded by Raed Yassin and Paed Conca in 2006, “Praed” is a band whose musical oeuvre can be described as a mixture of Arabic popular music, free jazz, and electronics.
In the same year, the band made its first public appearance in Al Maslakh festival in Switzerland, immediately followed by a concert at the Irtijal festival in Beirut. Since then, the band has frequented numerous international music festivals and toured intensively world-wide, spanning Japan, Europe and Canada. Through these endeavors, the band has created a large global network with other renowned musicians as musical collaborators.

The duo’s body of work mainly explores the terrain of Arabic popular music (“Shaabi”) and its interconnectedness with other psychedelic and hypnotic musical genres in the world, such as free jazz, space jazz, and psychedelic rock among others. Since its inception, Praed has shown a very keen interest in this music as a medium that reflects Egyptian society’s complicated fabric. Through the research it conducted, the band began to discover a strong cultural connection between “Shaabi” sounds and the “Mouled” music is played in religious trance ceremonies. The hypnotizing psychedelic effect that was embedded in this genre also triggered thoughts around its similarity to other popular music in the world that employ forms of sonic delirium, such as free jazz and psychedelic rock.

Spiritczualic Enhancement Center
Like an infinite circle whose center is everywhere and circumference is nowhere, the Spiritczualic Enhancement Center is an outer-national musical caravan, meandering in a world of free-beat. Their eclectic ingredients create an alchemical soup ranging from jazz-infused atavistic-futurism to frequency meditation. Featuring original artworks exploring the realms of syncretism, environments are brought to life via live-drawing projections and spaces transformed into temples of spontaneity. Creating soundscapes that glimpse into synchronistic magic, the bizarre participants of this ensemble remain agnostic: are they magicians, or merely tricksters? The band was founded on Christmas 2017, by secretly transforming the backroom of an abandoned Ottoman building adjacent to the Old City of Jerusalem into a temporary musical space.

Within the two weeks of its existence, the Center morphed into an ever-evolving and collaborative idea. Like a caravan which collects participants as it travels, a growing group of ‘outernational’ musicians are being magnetized. Carrying the Spiritczualic Enhancement Center within themselves, they gather on occasion for recording and performing. Free beat.

check all tour dates below!

and on thursday 13 June we’ll be in Hamburg at the MS Stubnitz boat.
FB event

see you around leute!

Summer season ends with the 4th market and a big bang of an after party! As usual they offer vinyl, used and new, as well as equipment, instruments and arts. After dark we celebrate a great summer with all you waxheads, helpers, DJs, artists, regulars, irregulars, visitors, guests, and supporters.

Okou
Afrofuturistic dance sensation! Singer Tatiana Heintz was born in Cote d’Ivore and has been a musical nomad ever since. She is singing in English, French and Bété, backed by multi instrumentalist Gilbert Trefzger on slide guitar and bass pedal. Third man is Ghost Nebula alias Konaté Thiemöko Alain-Stéphane on electronics.
https://vimeo.com/278151576

SAADI
Born in Syria and raised in the US, Boshra AlSaadi is a typical product of the multicultural music scene of New York. She sang and played bass in bands such as Looker and Teen, as well as a part of the Bubu Gang of the late Janka Nabay, where she also served as musical director. As a solo artists she has released two 45s and will pick up that thread for an exclusive Berlin performance.
saadinyc.bandcamp.com

Taha feat. Amer Wakka
Taha, a Syrian MC and producer, amalgamates postmodern prose, contemporary poetry, Arabic rap, and classical poetry. Taha’s music and texts draw on memory, emanating from displacement, exile, nostalgia, and the politics of home and identity.
Special guest Amer Wakka is a hip hop artist originally from Damascus, who has been gaining recognition in the Arab world after performing in Egypt, Lebanon, Jordan and his native Syria. Since his escape in 2015 Amer lives in Germany, but remains true to his mother tongue – Rap Arabi fi Almania – Arab rap in Germany. His first EP “CHAUA” was released earlier this year with “Bezirk Zwo”.
bezirkzwo.de/project/amer-wakka-chaua-ep

Rebel Up SebCat
The Belgian soul brother of Freak A$$ E, with his Rebel Up! collective following the same mission as the FreakOuternational: championing and supporting the network of outernational musicianship, be it on the radio, at parties and concerts, or on wax. His mixes are a wild ride across all borders and fences..

Shalaby (Okou)
Musical Nomad with swiss / egyptian roots and a deep knowledge of all things with strings. He plays electric and acoustic oud, as well as guitars, banjo and pedal bass in various projects including Mando & Gilbert and Okou (see above). As a DJ he journeys with ease between the west and the east. soundcloud.com/gilberttrefzger/mixtape-1-dj-shalaby

Freak S.E. (FreakOuternational)
The DJ with rots in Dub & Drum’n’Bass is hosting the FreakOuternational Radio Show on multicult.fm and the monthly FreakOuternational Vinyl Night at Monarch. He is co-founder of undestructible dub lab X.A.CUTE, plays drums in power duo Atomvulkan Britz and various instruments in the latest incarnation of the Mystical Communication Service.
always a pleasure
mixcloud.com/FreakAssE

and on sunday 23 september, Rebel Up SebCat will play at the Tropical Timewarp party in the Klunkerkranich rooftop venue in Neukoln area.

Tropical Timewarp is back for another high altitude session at Klunkerkranich! Joining us for some fresh mountain air on the ‘Hinter den Alpen’ upper deck dance floor some very special guests.. Providing an eclectic mix of tropical tunes from Lagos to London via Bogotá >>>

should you be in Berlin this weekend, from friday to sunday Rebel Up! SebCat will play 4 gigs.
here it goes!

this Saturday 7 feb, FreakOuternational is launching a new series of dance parties at Banja bar & beergarden, presenting sounds & rhythms from all over the world, delivered by bold DJs and collectors.

For our first official night we welcome DJ SebCat from the belgian/dutch collective Rebel Up!, and Rocky B, allround musical madman from Jahrusalem.

24oct15:00- 16:00Rebel Up @ Womex virtual, Conference Session "Record Labels in a Changing World"Rebel Up is hosting a conference panel with Kornelia Binicewicz (Ladies On Records) and Lewis Robinson (Mais Um), talking about current issues of running a label 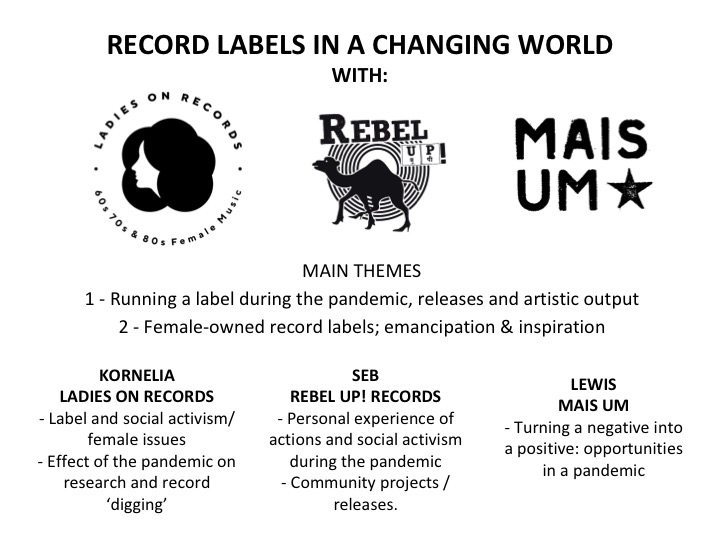